The use of 15kg lead roof flashing in Victoria continues. What is the VBA doing to stop it?

The use of 15kg lead roof flashing in Victoria continues. What is the VBA doing to stop it?
The wide spread issue of VIC plumbers using 15kg lead as an exposed roof flashing (the only state that does not comply with this building standard) has finally got some recognition and reaction from the authorities. The VBA are now well aware of the problem and how out of step their state is with the rest of the country. Some even feel it may now be more of a personal challenge to get this issue fixed as its thought that within the VBA some are embarrassed how this trend has so firmly established itself in Victoria over time!

What to do about this?
The use of 15kg lead flashing in Victoria is ingrained in the roof plumbing culture, and it was always going to be hard to change the plumber’s mindset and make no mistake it’s a plumbing not building issue. The VBA acknowledge there are some, let’s say weaknesses in a self-certifying system but the VBA have taken a definite position on this issue since last year with the update on the website www.vba.vic.gov.au the home of the VBA.

“Friday February 6 2015 “Make sure you use sheet lead flashing correctly”
Sheet lead is commonly used as a roof flashing material in modern home construction, but plumbing practitioners need to make sure it is installed and used correctly.

Sheet lead may be used as a flashing application where compatible with the roof coverings and on roof tiles (glazed or unglazed), plastic and glass coverings. However, where the roof is part of a drinking water catchment, sheet lead is not to be used due to its toxicity, unless it is pre-painted.

Sheet lead needs to be a minimum thickness of 1.7mm as per Table 8.1.1 of SAA HB39-1997 – Installation code for metal roofing and wall cladding.”

If the roof of your house has lead flashing of less than 1.7mm thick, it is not meeting Australian building code standards. That’s right, your roof is NOT compliant with the building code.

We’re not sure how much impact this has had, but in February the VBA had another go at reminding roof plumbers, surveyors and project builders of their responsibilities.

Sheet lead needs to be a minimum thickness of 1.7mm, which equates to approximately 20Kg/m2, as per Table 8.1.2 of SA HB39:2015 – Installation code for metal roof and wall cladding.”

Do we have to?
The VBA has also been active in reminding the Victorian building industry that HB (Handbook) 39 is mandatory, not just a guideline. This appears on a document issued by the VBA outlining changes to HB 39 in its latest update, on 15 July last year.

On this document the VBA states:

“SA HB 39 is a mandatory document

Practitioners need to be aware that all of the requirements in SA HB 39 are mandatory. Unlike Standards such as AS/NZS 3500.1:2015 within which some clauses are advisory, every provision in a Handbook called up by the Victorian Plumbing Regulations is compulsory.”

No room for argument there. The VBA is completely clear. No 15kg lead flashing, ever. 1.7mm thickness and above, always, according to its own newsletter (twice). And HB 39 in which this requirement appears, is mandatory, not advisory.

It’s clear that even the suppliers are aware of this issue…. 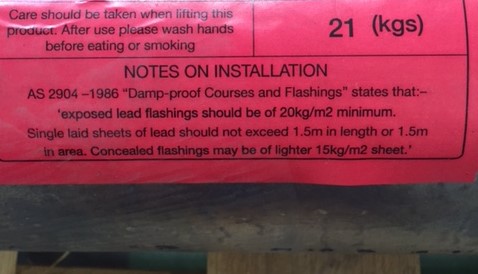 A Carrot V Stick strategy
It’s thought to be a carrot and stick approach being adopted by the VBA, the education about the issue is the carrot where the VBA has been trying to take plumbers on the journey with them to compliance, that was the thinking last year.  The ‘stick’ element of the strategy is not far away!

A look through the last twelve months of disputes and disciplinary proceedings undertaken by the VBA show none of these relates to the incorrect use of 15kg lead flashing…yet. The VBA have told us they are now taking a much more proactive approach to this issue than has been done in the past. Incorporating a check into the audit process, updated education within the VBA internal technical team and active investigation of new builds for this issue of non-compliance. Just recently many plumbers have been issued a warning for using 15kg lead, and if they continue to use 15kg non-compliant lead, punitive actions will follow.

So as yet we understand there is no strong disincentive for the use of 15kg lead, which many roof plumbers prefer simply because it’s what they’ve always used.  It’s what they were taught to use when they learned the trade and put simply it’s cheaper than 20kg lead. This makes it a cost exercise, but with the next wave of action being more than just a slap on the wrists….why take the risk?

The use of 15kg lead is a habit that we feel will change, and quite soon. With the heightened attention on this issue by the VBA and recent warnings issued to plumbers, it’s felt disciplinary action is not far away. It’s also a demonstration to the state that the VBA is clear on the requirements for building homes, that the VBA is responsible for enforcing these requirements, and that they do not accept this non-compliant ‘standard’ in Victorian residential building.

Why even use Lead at all?
Given that lead is a highly toxic substance, proven to be dangerous even after small exposures, and the symptoms of lead poisoning include nasty stomach cramps, nausea, vomiting, irritability and fatigue. Using lead in roof flashing is dangerous for both the installer of the flashing and anyone who lives in the house, especially if rainwater runoff is going into a water tank. Painting lead will help but not eliminate the risk at roll ends and cuts in the lead.

All this would make you think, “why on earth would I use lead flashing on my roof at all?”

It’s a great question. Especially when there are other excellent alternatives to lead which are proven to be safer and in fact are quicker and easier to install than lead. They’re not new either. Wakaflex has been around for over 20 years, and over that time has proven its durability and safety, time and time again.

Now the only question is who is going to be in the news on this issue as the first example of non-compliance?